Earlier this week I read an article on the Debian Weekly News, about a Debian box running on 3 Watts, and it reminded me of a project that I was asked to put on the shelf some time ago. The gist of the article linked to by the DWN was that Alex Perry got to wondering how much power his Linksys switch was sucking down whilst running 24/7, and found that his Manga, an ARM based router box, not only consumed less power but was able to run full blown Debian to boot. His point was "If I am going to pay to have a switch run 24/7, I might as well have the switch be a useful server as well." Following his article the PepLink community promptly got X11 working on the Manga and Alex's website was updated with the screen shots, which I might add are quite amusing.

While I do sympathize with the original thrust of the article, I must say that the Manga's ARM is a rather diminutive processor for a desktop machine these days. So my question is why would you run a Manga as a desktop to get down to the 3 Watt mark when for just a few more Watts you can run a box with a G4 processor? Yes, I am talking about that little machine that all of my geek friends (me included) seem to be drooling over as of late. The Mac Mini!

Several months ago I was in need of finding a small but powerful computer that could be run for a long period of time on batteries and not be a burden to carry. I was looking at several embedded options from places like Kontron and mini-box, when I saw an article on the Mac Mini. Looking at the limited specs for the Mac Mini on Apple's website I began to suspect that if I removed the cdrom drive I would be able to fit a "lithium-ion polymer" battery pack inside the vacated space. I say that I suspected this because Apple is lousy about posting specs about internals and stuff that your Grandparents wouldn't normally ask about. So I ran down to the local Apple store with my trusty calipers and had one of their technicians go into the back and measure the dimensions of the cdrom drive for me. The numbers that he gave me made my day, the batteries would fit! Now about power specs. Apple of course did not have the DC power specs online, and nobody I talked to at the Apple store or on the support line could get them for me. In an act of desperation I resorted to sending email to combinations of addresses like steve_at_apple.com sjobs_at_apple.com, steve.jobs_at_apple.com, etc asking for the specs. Funny enough I got a reply (No, not from Steve Jobs) from an Engineer who was quite helpful. It looked like the Mac could do it, so I decided to get one and hack on it. The Mac was dirt cheap compared to the embedded systems so it was a very limited risk approach to proceeding on the project.

I ordered the Mac, a 4GB Hitachi Microdrive, and a laptop-IDE to CF adapter. I also talked to Mike (Dr. Zhang) at SKC PowerTech, Inc, and he was kind enough to send me some batteries for evaluation. The batteries were a new design and were not yet in production, so there was a bit of a lead time on those, but at the end of two days I had the rest of the necessities at hand. First things first, I measured the out of the box power draw of the Mac Mini, which turned out to be only 12 Watts! This was better than the specs I was given. I then proceeded to remove the hard disk and replace it with the Microdrive-CF adapter setup. Then I got me a Debian (Sarge) disk *GRIN*. This was the first time I had touched a Mac, and I was pleased to find that the Debian install on the Mac was smooth and painless. After getting the system up and running, I did some stress testing on it. The testing involved running simultaneous FFT routines (like 30 of them) on 80MB data files. The system was so heavily loaded that it took about 15 minutes to log into the machine from another terminal, and another 15 minutes to get to the bash prompt. During this utter thrashing of the system the highest the power usage spiked to was 20 Watts, but it stayed around 14 Watts most of the time. This was impressive...

This is where the bad news came... The batteries came in, and not 30 minutes later I was informed that effective immediately my time had been re-prioritized. Which is why the project had been put on the shelf. After reading Alex's article I just had to make some time to hack on it, so a couple of nights ago I did and I am pleased to report that the trial was a successs. This test was only a feasibility test, and there is a lot of work left to do on the system. For instance I still need to design the circuit protection for the batteries. For now I have been trickle charging the battery pack with a Topward power supply set to limit voltage and current to 20VDC and 50mA. Ultimately I want to use this thing with a heads up display, but for now I am using a monitor so it is not quite as portable as I would like *GRIN*. Read on for the Tech details of the test and pretty pictures...

Disclaimer: I am not responsible for anything you do with the information you find on this site. If you are hacking hardware to make it do stuff it was not intended to do you are most likely voiding your warranty. Lithium-ion batteries can be quite dangerous if not used and recharged correctly. If in doubt always follow the advise of the manufacture and ignore the ramblings of crazy geeks like me. This hack worked for me, but your mileage may vary.


Now that we have the formalities out of the way, the first thing that needed to be done was to open up the Mac, and disassemble it so that the battery power leads could be soldered onto the motherboard. 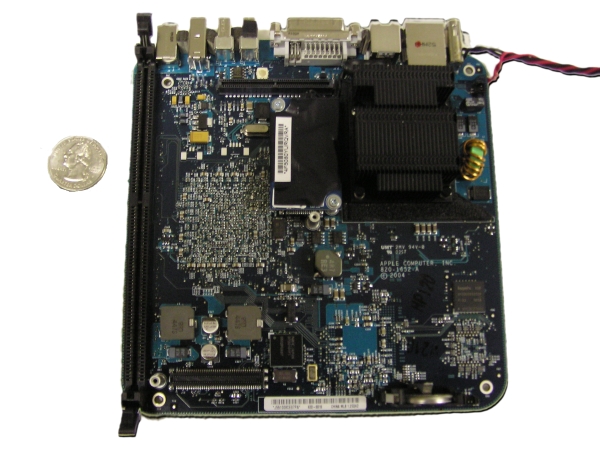 I placed the bare board on an ESD mat and plugged in the power cable. Then with my multimeter I probed the voltages on each pin on the power connector where it was soldered to the board. The Power cable has 10 conductors in it, 6 of which are neutral conductors, and 4 of which carry 18.66V DC. The neutral conductors are shorted electrically to the conductor's shield and the chassis ground. The connector has 5 pins soldered to the motherboard, and 3 spots where the shield is soldered to the motherboard. 2 of the pins (which have red wires soldered to them in the pictures below) are 18.66V, two of the pins are neutral, and the other pin is regulated inside the connector to 1.33V (which is used presumably to power the on/off switch). According to the Engineer at Apple, the Mac Mini should be able to operate anywhere between 20VDC and 10VDC. Caveat: If you plan on using the firewire port to power any external devices you cannot drop below 18.5VDC before those devices can start to suffer power loss.

The Microdrive was not chosen for either power or size considerations. The Battery pack will fit inside the Mac Mini just fine with Mac Mini's normal laptop hard drive in use, and my estimates on battery life already exceeded what I needed for runtime of the system. I used the Microdrive because I needed the system to be able to take a physical beating and keep on running. Microdrives can take approximately 2000G of shock (non-operational) and 200G of shock (while in operation) before failing.

The Moment of Truth

Caveat: There are a couple things I should note here, fortunately they can be easily dealt with. I will update this page when I have the fix. First, remember back in the wiring section when I said that there was a 1.33V pin power connector soldered to the motherboard? When I first plugged the battery in I was assuming that that pin would be regulated off of the 18V line on the battery, but apparently it is isolated and there seems to be a regulator inside the connector itself. So when I plugged in the battery and pushed the power button, to my disappointment nothing happened. I got out my voltmeter and measured the voltage off the battery and the voltage going to the board and everything seemed to be correct, so I plugged in the power cable and hit the power button...

...The Mac started right up, so I pulled out the power cable...

...And it kept right on going.

The second thing I wanted to mention, and this is IMPORTANT, these cells don't have a circuit protection on them. So when you recharge them, do not use the Mac's power cord. Instead use a power supply which has voltage & current limiting knobs on it. Check the specs on the batteries for the current charge curve and stay within it. Don't blame me if you fry your  Mac's power supply or burn down your house.

The Mac Mini ran, under very heavy load, for just over One Hour and 50 Minutes (1:50) on the Li-ion Polymer batteries!

TODO:
Design a circuit protection board (CPB).
CPB should include a 1.33V voltage regulator to run the power switch.
CPB should include voltage and current regulation so that the battery can be charged from the power cable.
Trickle charging is slow, so implementing "smarter" charging on the CPB is a good idea.
Needs a battery monitor for power management.
Configure suspend/sleep states.
Configure Wake On LAN.